“Mankind faces a crossroads. One path leads to despair and utter hopelessness. The other, to total extinction. Let us pray we have the wisdom to choose correctly”—Woody Allen.
What’s it going to be, eh?
It’s obvious that the combined impact of increasing human consumption of (ineptly named) natural resources, multiplied by increasing human population growth results in unacceptable losses in critical natural habitat, biodiversity, living topsoil, quantity and quality of potable water, and increases in species extinction. Ecosystems wounded by human development and destruction are more susceptible to climate variation, putting more stress on species shifting with habitats.
The human reaction is to ask, loudly, while wringing our hands: “What can we do to stop this? What is the solution to overpopulation, resource depletion and (*GASP*) Global Warming?
The answer is: there is no solution.
There is no solution to natural processes. Natural processes are not a problem that can be solved. There is no solution to a species whose population has overshot its resource base. There is no solution to global climate variation. There is only accommodation to the reality of life on this planet.

If humans were a rational species, we might decide it is in our own best interest, and just by the way, in the interest of all other species, to control our population growth and reduce consumption, stop gobbling up all the non-vertical land in sight, stop polluting the air, land and water, and stop sucking all the nutrients from the living topsoil and flushing it into the ocean. We might decide to live like a good neighbor to the community of life that makes it possible for us to live on this poor abused and battered planet.
But, alas, we’re not a rational species.
We’ve cut ourselves off from contact with the non-human world and put it in a zoo so we can continue our profligate ways, and still come and visit the cute little plants and animals now and then, for our amusement… and not have to think about them overly much when we’re busy… consuming.
We’ve developed a dominant culture based on consumption to excess, to make even more profits for already rich people, and we sit up nights and complain about it. We’ve developed religions that forbid us from controlling our population to levels sustainable (the real sustainable) within existing, highly variable resource availability. We’ve developed a system of food production dependent on stable and unchanging weather patterns. And, worst of all, we’ve developed political systems controlled by those who profit from all the above.
Rather than taking seriously the prospect of a sinking ship with too few lifeboats to save all the passengers, we continue to politely listen to the orchestra sawing away at a funeral dirge on the poop deck, as we munch on canapés and sip a fine vintage champagne.
It’s too late to build more lifeboats. It’s too late to restrict the passenger list. It’s too late to stock up on caviar and champagne. The ship has already hit the ice and the forward compartments are rapidly filling with icy water. 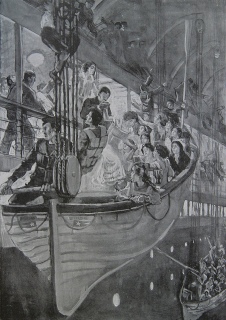 Gravity and hydrodynamics are taking over the cruise and the ship of human civilization is on its way to its ultimate briny grave.
Don’t be alarmed. It’s only a temporary detour. There are, after all, some lifeboats, and some will survive. There are still crackers and cheese and an inferior domestic wine waiting beyond yon horizon. Certainly enough for the few who have had the forethought to don warm clothing and life vests before coming on deck.
The ship will go down, as it must, as ordained by the sacred laws of Nature. And, Life Will Go On after the Grand Adjustment, as it has for hundreds of millions of years.
There’s still time to tighten our life vests, pass out the survival rations, swing out the davits and climb aboard the rafts. It just might be an adventure, a lesson in species survival to newcomers on the evolutionary scene. Who knows, we might learn something valuable that will last us for a millennium or two.
Mother Nature is hard and she’s fair.

The article: Has CO2 warmed the planet at all in the last 50 years? It’s harder to tell than you think explains the uncertainty regarding the Anthropogenic Global Warming proposition.

It seems clear that the perception of human caused “Global Warming” is a function of several factors: 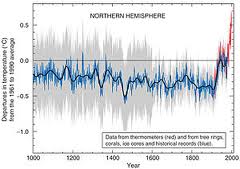 3) Political agendas – environmental groups, UN/IPCC, World Bank, International Monetary Fund – organizations such as the IPCC, the Met Office, Union of Concerned Scientists, United Nations World Meteorological Organization are not scientific organizations, they are science policy organization. Therefore, the conclusions they reach and communicate are not scientific conclusions, they are policy recommendations based on interpreted results of scientific investigation. The United Nations focus is on “sustainable development,” and most, if not all of their policy documents are couched in terms of making the developed nations pay for continuing development in the “global South.” Environmental organizations such as Greenpeace, The Sierra Club, and World Wildlife Fund have changed from grassroots advocacy and action to political lobbying organizations, requiring multi-million dollar budgets and a compromising presence in world seats of power and influence.

4) Natural climate change – Yes, the climate of the earth does change, all on its own. In fact, change is the norm. It is the expectation of a static, unchanging climate that is at odds with reality.
5) Media hysteria – Media mavins love a bold headline, even if it isn’t true.

Some one or some organization is attempting to influence the upcoming annual meeting of the American Meteorological Society (AMS).

According to  Urging American Meteorological Society to Get Tougher on Climate Change, a program called Forecast the Facts is attempting to lobby the AMS to change their 5-year policy on climate change to a new policy “drafted by a panel of [unidentified] experts” (emphasis added). The “Campaign Director” is identified as Daniel Souweine.

The Forecast the Facts web site turns out to be a product of “Citizen Engagement Laboratory (CEL).”


And who is the Chief of Staff of CEL? You guessed it: Daniel Souweine.

The web site describes CEL as: “a non-profit, non-partisan organization that uses digital media and technology to amplify the voices of underrepresented constituencies. We seek to empower individuals to take collective action on the issues that concern them, promoting a world of greater equality and justice in the process.”


The CEL web site lists 350.org as a “Partner,” which describes itself as: “building a global grassroots movement to solve the climate crisis. Our online campaigns, grassroots organizing, and mass public actions are led from the bottom up by thousands of volunteer organizers in over 188 countries.“


Sounds like birds of a feather, even though they are both attempting to lobby a major national organization to change a policy that affects all of its members… from the top down. Hardly grass roots organization. And hardly on behalf of “underrepresented constituencies.”


Evidently, grassroots meteorologists are insufficiently toeing the line when it comes to laying weather patterns at the feet of “global warming.” Someone unnamed wants them to publicly join the global warming bandwagon in blaming human CO2 emissions for observed climate change, ignoring the uncertainty of climate science, ignoring all evidence to the contrary, insisting on one single simplistic explanation for climate change.


TeeVee weather presenters, even those who are qualified meteorologists, are the most visible source of public information about weather and climate. They appear daily to billions of people, and whether or not it is a good idea, their “opinions” about climate change carry a lot of weight in popular culture. It’s no wonder that those whose interests are served by spreading fear of climate change in support of a predetermined economic outcome are after these “grass roots” who fail to tremble in fear of natural climate phenomena.


This is not grass roots, this is Big Money come to the service of shadowy figures in the background of international politics and economics. Who profits from fear of climate change? Who is funding this program to gag independent meteorologists and TeeVee weather presenters?


This is part of a concerted behind-the-scenes program funded by monied interests to subvert all elements of environmental awareness and activism to the cause of money and power, political and economic influence. Global warming hyperbole has been used to discredit free-thinking, independent scientific research, free expression, free thought and free action. The individuals and corporations funding this movement are laying the ground work for society controlled by corporate-government-military oligarchies to maintain the economic and political status quo.

In short, Monbiot’s article makes the claim that recent cold and snowy weather in the UK and elsewhere is due to warming in the Arctic due to reduced Arctic ice causing the ocean to absorb more heat from the sun, forcing Arctic cold further south. Therefore, severe winters are caused by global warming.

The errors in this in this conclusion are as semantic as they are scientific.

First of all, from the Niggling Small Details Department, the ocean doesn’t absorb heat from the sun. Heat does not travel from the sun to the earth. Energy travels from the sun and is transformed to heat by being absorbed in the atmosphere, land and ocean.

Secondly, and more importantly, the Earth is in a cooling phase at the moment (see Akasofu, 2010 Natural Science at ﻿http://www.scirp.org/journal/NS/) and is likely to remain so for the next 20 years or so. What Monbiot is referring to is regional warming, not global warming, which is far more important in terms of yearly weather patterns, aka, the white stuff we shovel off our front walk.

As one might expect, it turns out there is more to this story than meets the UK journalist’s computer keys. “Everyone” knows that the Arctic is warming faster than the rest of the Earth, right? NASA says it, James Hanson says it, Monbiot says it.

How do we know this to be true? Who is doing the measuring?

Well, lots of people actually, and one is no surprised to learn that they don’t all agree.

There are several databases of global temperature records. The above mentioned NASA and James Hanson have one called GISS. HADCRUT is the database for the Hadley Centre of the Met Office and the Climatic Research Unit (CRU) of the University of East Anglia, of email fame.

Guess what? They don’t agree.

It seems that the GISS database has been manipulated to fill in Arctic and Antarctic temperature records with those from land data sources, while HADCRUT reports only the records from their true sources.

And guess what? GISS reports 3 degrees C warming in the Arctic and HADCRUT reports 2 degrees cooling. Who you gonna believe?

From many winters I spent in the Arctic screwing trees, I learned (at least) one thing: winter temperatures vary wildly from place to place, from hill top to river valley, from land to ocean, from snow to ice. When I rode my bicycle eight miles to work in Fairbanks, the temperature would vary from 20 below zero at home, to 40 below zero as I rode through the river valley, back up to 20 below zero on the hill top overlooking the valley.

Computer manipulation of Arctic temperature records results in an electronic version of Arctic climate variation that bears little relationship to that experienced by the Inuit who live there.