It’s the fourth day of the new year and the winter season. We’ll enjoy thirteen seconds more daylight today than yesterday, as the planet we all ride upon swings merrily around the sun, the giver of all life. Last night, a wee thunderstorm rumbled through our fair county, echoing off the mountains, flashing their peaks with white lightning. It’s chilly these days and nights, at least for this part of the world. Winter arrives, even on the Left Coast

It’s time for my favorite Christmas story by Ed Abbey, Merry Christmas, Pigs, a celebration of all things wild and wonderful, including we humans. You can read it HERE.

We celebrate this new year and new season together, as we look forward to our daily walks through the neighborhoods and along the shore of the, mostly, Pacific Ocean and Monterey Bay.

Long live the weeds and the wilderness, the two-legged, the four-legged, the feathered and the scaled, and those upright bipeds who defend and protect them.

Happy new season, merriness in the vast biodiversity of life! 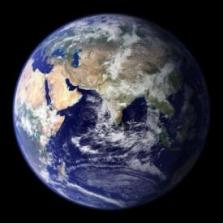 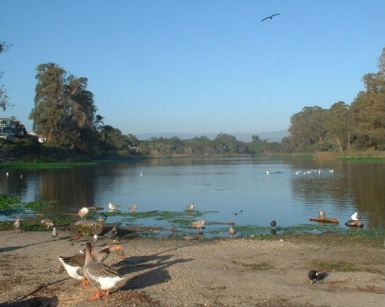 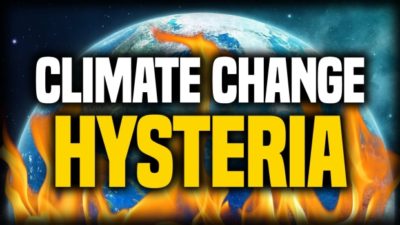 I recently made a mistake by posting an entry on the Edward Abbey Matters Facebook page about the subjugation of environmentalism by climate hysteria (See HERE, HERE, HERE, HERE, HERE and HERE) speculating that “If Ed Abbey were alive now, he’d turn over in his grave.” For those unaware of Edward Paul Abbey and his works (1927-1989), see my Ed Abbey web page.

I was surprised at the virulence of the response my post received from those who thought I was attempting to speak for the late Ed Abbey, and that I was denying climate change. Yes, I should have known that irrational climate change hysteria dominates the Internet and all other forms of communication these days, to the exclusion of any rational thought about the science or the realities of climate variability and the nature of global climate change. (See Rowdy College Students Protest Campus Forum Debunking Climate Alarmism, for an extreme example.)

Much of the response to my post was in the form of “97% of scientists agree that climate change is real and humans cause it,” “What are your qualifications to question the climate change consensus?”, and “Show me scientific publications that disprove human caused climate change.”

Of course, there are a plethora of publications on both sides of the climate change argument. There is no scientific consensus, even if consensus were important in scientific investigation. Most importantly, one needs only to search the Internet and read to find a myriad of articles questioning the human caused climate change hypothesis and providing data pointing to other climate variables, such as Milankovic cycles, cloud formations, natural ocean/atmospheric dynamics and chaos and complexity theory that demonstrates that climate is basically unpredictable.

Rather than attempting to provide pointers to this documentation on Facebook, which is unsuited to such complex discussion, I’ve created pages on this blog (HERE and HERE, and more to come) to provide a detailed explanation of my position, with links to relevant documents. This is a work in progress, so bear with me for a bit as I pull this all together.

Just to let the climate cat out of its changing bag, the take home message is this:

Climate change and climate variability are natural physical processes that are influenced by the complex interplay of numerous variables, one of which is human greenhouse gas emissions. 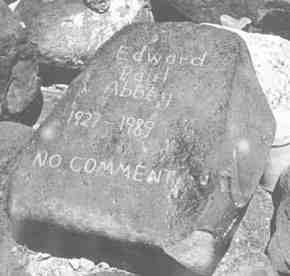 If Ed Abbey were alive now, he’d turn over in his grave.

Ed died in 1989, a month before the Exxon Valdez oil spill. Bad for us environmeddlers, bad for wilderness, bad for mountain lions, cone-nosed kissing bugs, tortoises and desert rats of the two-legged and four-legged varieties.

What is fortunate, from Ed’s perspective at least, is that he didn’t live to see environmentalism gut shot, hog tied and neutered by overweening climate change alarmism and hysteria.

Today’s environmentalists are an endangered species, skulking about the fringes of “Extinction Rebellion” strikes and “Climate Emergency” media events with “Climate Denier” badges hung about our necks. Climate hysteria is the be-all and end-all of all things environmental in these sad and frustrating times, as we contemplate accelerating habitat destruction, air, water and soil pollution and natural resource destruction at the hands and feet of profligate humans.

One of these days they’ll discover that climate changes all the time, with or without human help. They’ll learn that we can’t slow down, stop, reverse or change the direction of climate change. All we can do is learn to live with the climate as it is, and stop destroying what little is left of the natural world that once was.

Long live the weeds and the wilderness, and real environmentalists, too! 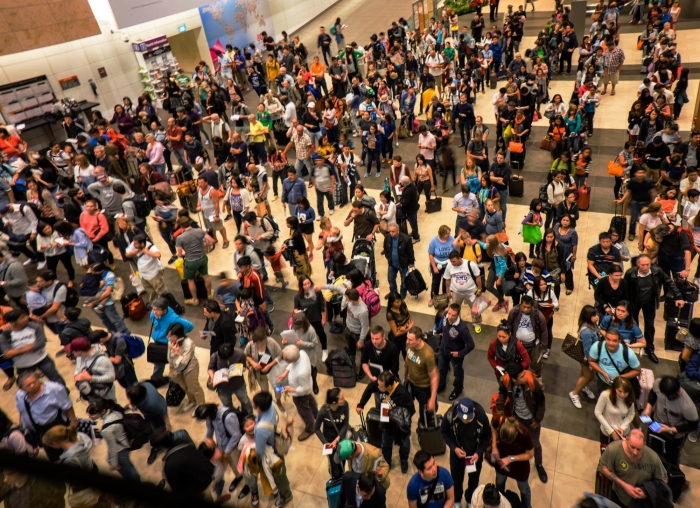 ― Edward Abbey, Postcards from Ed: Dispatches and Salvos from an American Iconoclast

Ed Abbey’s words were prophetic when he wrote them, even more so now than he realized in his too short life.

We live in a world of crowds, everywhere, from the street outside our doors, to our daily work and play, in our parks and “open” spaces, we live in a teeming mass of humanity, an ever-growing technocratic occupation of every square inch of this much abused planet.

One birth every 8 seconds; one death every 12 seconds; one international migrant (net) every 34 seconds; a net gain of one person every 16 seconds. Oops, here comes another one. Scoot over and make room.

Yes, our societies have become more authoritarian, repressive and murderous. In the great bell shaped curve of human behavior, where only a percentage of the population acts badly, more people means more people acting badly. Thus increasing numbers of  laws, regulations and rules, and the accompanying and rapidly proliferating number of lawyers, regulators and rulers.

The greatest threat to life on this planet is not climate change, nuclear proliferation or wandering asteroids. Those are distractions, economic opportunities, political footballs. The greatest threat is human growth and profligacy, overweening hubris and inability and unwillingness to consider the consequences of our own actions, and inaction.

Population control is the most defiled of all subjects for cogent deliberation and understanding, and the most urgent. It is socially incorrect, economically unthinkable and political suicide. Population control is the bastard stepchild of the global growth industry, the unquestioned acceptance of the assumption that economic viability necessitates continuous and ever increasing population and economic growth. More than the ideology of the cancer cell, human growth is the evolutionary path of the dinosaur, that had to develop two brains in order to manage their overwhelming bulk. So far, humans have only one brain, and that one only firing on three cylinders.

Homeless camps in every community, out of control crime everywhere, proliferating imperialism internationally and decreasing political capability locally and nationally, all are symptoms of a human population that has outgrown its ability to care for itself, and the biosphere that supports us.

“There is no justice, sense or decency in this mindless global breeding spree, this obscene anthropoid fecundity, this industrialized mass production of babies and bodies, ever more bodies and babies. The man-centered view of the world in anti-Christian, anti-Buddhist, antinature, antilife, and–antihuman.”

― Edward Abbey, Beyond the Wall: Essays from the Outside

Every now and then, someone raises the ghost of Edward Abbey, author of The Monkey Wrench Gang, Desert Solitaire, The Brave Cowboy and other subversive literature, asking the question, “What would Ed think about the world today?”

Well, they’re pretty much the same, only more so.

Since Ed’s time the powers that be have learned much about thought control, access to information, how to funnel dissent into harmless diversions. The President has become a figurehead for the corporate oligarchy, pretending to offer difference while maintaining the status quo. Democracy has been forestalled. Governments are directed by policy promulgated by an entrenched, well-compensated professional staff.  Politicians learn very quickly the source of their campaign funds, and kneel down in obeisance to fiscal realities.

Big Green has joined the corporate world and traded grass roots activism for political and economic power. In an attempt to be “relevant,” to human desires at least, environmental organizations have become tools of social engineering, concentrating on environmental justice at the expense of biodiversity, critical habitats, pollution and conservation.

The facile mindlessness of “global warming” has blown away all awareness of environmental activism, concentrating on appeals to central governments and quasi-governmental organizations to “reverse climate change.” Meanwhile, corporate toadies and government sycophants rub their hands in Glee at the prospect of unlimited “Green” profits.

The clearest path seems to be to turn our backs on the whole sorry mess and walk away, mumbling to ourselves. And yet, on the local scene, habitat must be saved, developers thwarted, city councils educated. Democracy, such as it is, must be cultivated hereabouts, as the only means of maintaining a semblance of rational government, despite all evidence to the contrary.

We do what we must do, each in our own place. We change the only world we can change, that between our own ears, and we provide the example for our neighbors to work on theirs.

Democracy Now’s Amy Goodman and Juan Gonzales interviewed Doug Peacock about his work defending grizzlies and grizzly habitat. Doug talked about his friendship with Ed Abbey and played clips from a couple of Abbey speeches.