Yes, I know I promised to go through the Way of Nature elements. But first, I want to write about an element that is not included in my Way of Nature analysis: 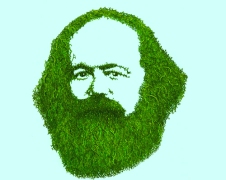 Now, before you click away from here in disgust at the term, bear with me for a moment while I explain why I’ve not included ecosocialism as an element of the Way of Nature.

“Eco-socialism, green socialism or socialist ecology is an ideology merging aspects of socialism with that of green politics, ecology and alter-globalization or anti-globalization. Eco-socialists generally believe that the expansion of the capitalist system is the cause of social exclusion, poverty, war and environmental degradation through globalization and imperialism, under the supervision of repressive states and transnational structures.

“Eco-socialists advocate dismantling capitalism, focusing on common ownership of the means of production by freely associated producers, and restoring the commons.”

Delving into ecosocialism is a lot like stepping into a steaming swamp where you can’t see the firm bottom. It’s chief proponents, Ian Angus in Canada, Derek Wall in the UK and the late Joel Kovel in the United States, have written voluminously on the subject, as it has evolved over the past 17 years. Ian Angus’s Climate and Capitalism website is the best place to explore the history and current development of ecosocialism.

Why do I exclude ecosocialism from my Way of Nature?

Ecosocialism began as a breakaway political philosophy from standard, everyday Marxism, an admirable attempt to align classic socialist economics with modern understandings of the effects of human social systems on the natural world. Unfortunately, because of its basic Marxist underpinnings, it falls short in two important respects: human population, and human consumption of natural resources.

Adherents of ecosocialism are unswervingly opposed to any form of population stabilization or control. This roadblock to thought and rational analysis arises from Marxist focus on economic justice. Ecosocialists hold than any form of population control would preferentially affect people of color, people in poverty, people of the global south. This refusal to consider the detrimental effects of increasing population is extended to immigration as well, holding that people should be free to move from place to place at will.

One of the basic Marxist assumptions of socialism is that with the elimination of capitalism, production will be for use and not for profit, and therefore increased technological production would create enough to satisfy everyone’s needs, equally in every part of the human world. In such a “post-scarcity” world, human consumption of natural resources would decline and reduce impacts on the natural world.

These two ecosocialist assumptions ignore the formula for measuring and predicting global human impacts on the natural world developed by Barry Commoner, Paul R. Ehrlich and John Holdren in the 1970s:

I = P x A x T – Impact on the nonhuman world is a function of affluence and technology, multiplied by population.

While it may be true that a socialist economy of use value eliminating production for profit value would reduce per capita production and consumption (this has never been demonstrated historically), this positive result would be held hostage to a growing population, which would overwhelm any gains through a reduction in production.

Lifting restrictions on immigration ignores the realities of local ecosystems and carrying capacities. If humans are free to drift from place to place, in response to population and social pressures, local ecosystems will quickly degrade in areas where the human drift accumulates. While restrictions on immigration by arbitrarily designated state boundaries might not be desirable from a social standpoint, an ecosystem-based analysis of human population pressures must be used to avoid undesirable negative impacts on the local ecosystem. If social relations in  a particular region are undesirable, humans should solve their problems in place, rather than exporting them to other ecosystems that may be less capable of withstanding increased human impacts.

In the end, despite its optimistic appellation, ecosocialism is yet another anthropocentric philosophy that begins and ends with human benefit as its primary concern and only tangentially addresses the detrimental effects of human growth and technology on the non-human world.

Socialism, even ecosocialism, offers no inherent alternatives to capitalism with regard to human consumption and destruction of natural habitats.

Now then, back to The Way of Nature.