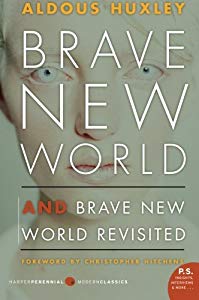 In 1948, George Orwell published 1984, the dystopian novel of a Communist inspired totalitarian oligarchy in England that uses information control, fear mongering, intimidation, and total surveillance to control and subdue the general population.

Let’s compare Orwell’s observations of the social world of 1958 with the world we see around us today some 35 years later.

In Brave New World Revisited, Huxley points out that death control has been systematically provided by benevolent societies through increased sanitation and medical intervention, while birth control requires the cooperation of all citizens, and is limited by cultural (mostly religious) sanctions.

In Brave New World, birth control is achieved through state control and management of human breeding, restricting the global human population to around 2 billion people. In this fictional world society, the human population does not threaten natural areas with excess resource exploitation, allowing some areas to return to wild states.

Huxley concludes that, in the real world, absent any form of effective birth control, “... that problem will render insoluble all our other problems. Worse still, it will create conditions in which individual freedom and the social decencies of the democratic way of life will become impossible, almost unthinkable.”

We see today the outcome of Huxley’s darkest vision: democracy on the block, up for sale to the highest bidder, homeless camps in every city where the mentally handicapped and drug addicted citizens are turned loose among the populace, to support themselves and their habits through petty thievery, murder and general social disruption. Meanwhile, the over-organized and bureaucratized social agencies and local governments tie their own hands with “progressive” rules and regulations that defy any sane and effective solutions to these ubiquitous social ills.

Our Huxleyan problems are compounded by Orwellian despotic and imperialist governments, fomenting invasion and war in sovereign nations that have the misfortune of harboring large oil deposits beneath their sands, while at home graft, corruption, and malfeasance have become the norm and go unpunished, at least for those dispossessed of economic and political influence.

Huxley concludes his chapter on Over-Population with a warning:

“But liberty, as we all know, cannot flourish in a county that is permanently on a war footing, or even a near-war footing. Permanent crisis justifies permanent control of everybody and everything by the agencies of the central government. And permanent crisis is what we have to expect in a world in which over-population is producing a state of things, in which dictatorship … becomes almost inevitable.”

“O brave new world, That has such people in it!”